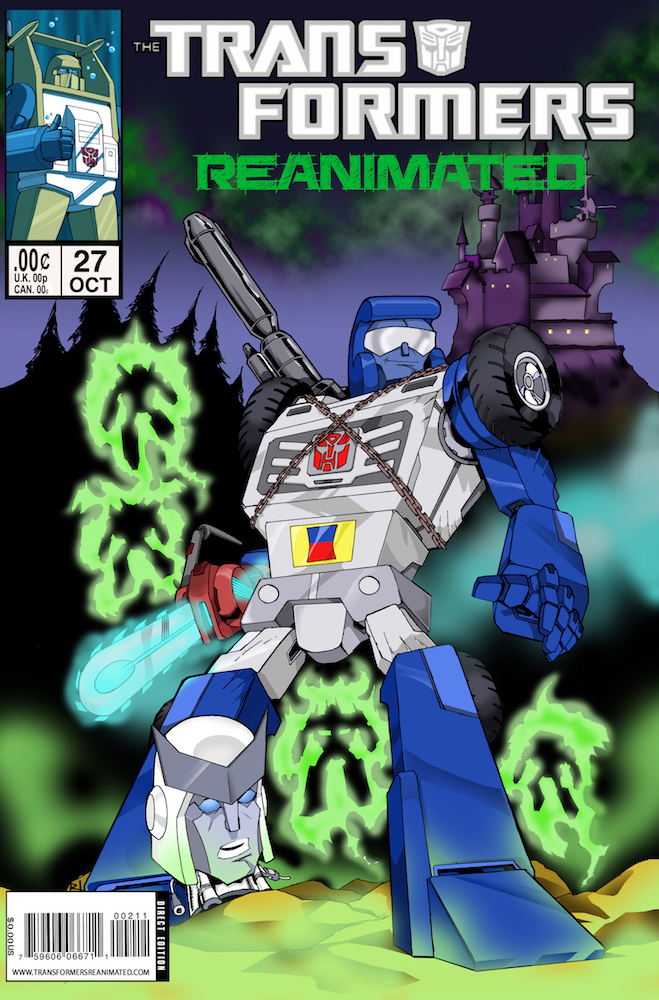 Happy New Comic Book Wednesday! Get your hands on this FREE and brand new issue of Transformers: REANIMATED!

Part of the fun of creating and continuing this project of ours, has been integrating characters that were unused or never-seen on the original G1 cartoon series. But after deep-diving into the mythos to reveal the Transformers: ReAnimated versions of cult-fan-favourites like Piranacon and Trannis, now we move onto to even more characters neglected by the cartoon series.

Pretenders never made it onto the cartoon, at least in the western iteration. And without fundamentally altering the timeline and continuity we’ve aligned ourselves to, how could we introduce characters like Skullgrin, Finback, Iguanus and the other monstrous Decepticon Pretenders? Well, good reader, welcome to Transformers: ReAnimated, where we make the seemingly impossible possible!

This month’s issue also allowed me to homage one of my favourite film franchises of all time, The Evil Dead. And since October is the month of Halloween and all things spooky, the time seems right to unleash this chilling issue, oddly enough featuring none other than the most laidback and peaceful Autobot: Beachcomber.

Long-time readers of ReAnimated (of listeners of our podcast) will know that Beachcomber falls into the category of ‘Greig’s Weirdos’ – a collection of odd Autobots that became my favourites as a kid thanks to an assortment of criteria. Sometimes, it’s a cool voice (or more specifically, a way of speaking) like Warpath or Seaspray, sometimes it’s the almost-un-Autobot-like character flaws in their personality (like Tracks) or sometimes it’s just their constant mental anguish that made me a fan (like poor Red Alert).

Beachcomber fits many of these criteria. He’s just a relaxed hippie, more interested in the environment and peace than fighting some forever-war against the Deceptions. And his smooth voice makes him fun to listen to as well.

So who better to take up the role of demon-ass-kicking reluctant hero, Ash Williams for our Evil Dead tribute?  It might not make sense on paper, but as this issue will reveal, when the Autobots are besieged by an evil supernatural power, there’s only one little geologist groovy enough to take care of business.

This month’s cover was created by long-time friend and collaborator of ReAnimated, The Autopod Decepticast’s own, Ryan Jett. Not only is Ryan a great friend and supporter of our project, but he also shares my love of the Evil Dead movies, so asking him to create the cover for Issue 27 seemed like a natural fit.

And once again, he’s knocked it out of the park. Inspired by the now-iconic movie poster for Army of Darkness, Ryan has honoured it to the Nth degree, giving Beachcomber a whole new lease on life in the process.

So, if you *did* you like issue 27: Deactivated By Dawn, then please consider contacting IDW Publishing (Via E-mail or Twitter) and letting them know you would like to see Transformers: REANIMATED as an IDW ongoing comic book written by Yoshi and Greig.