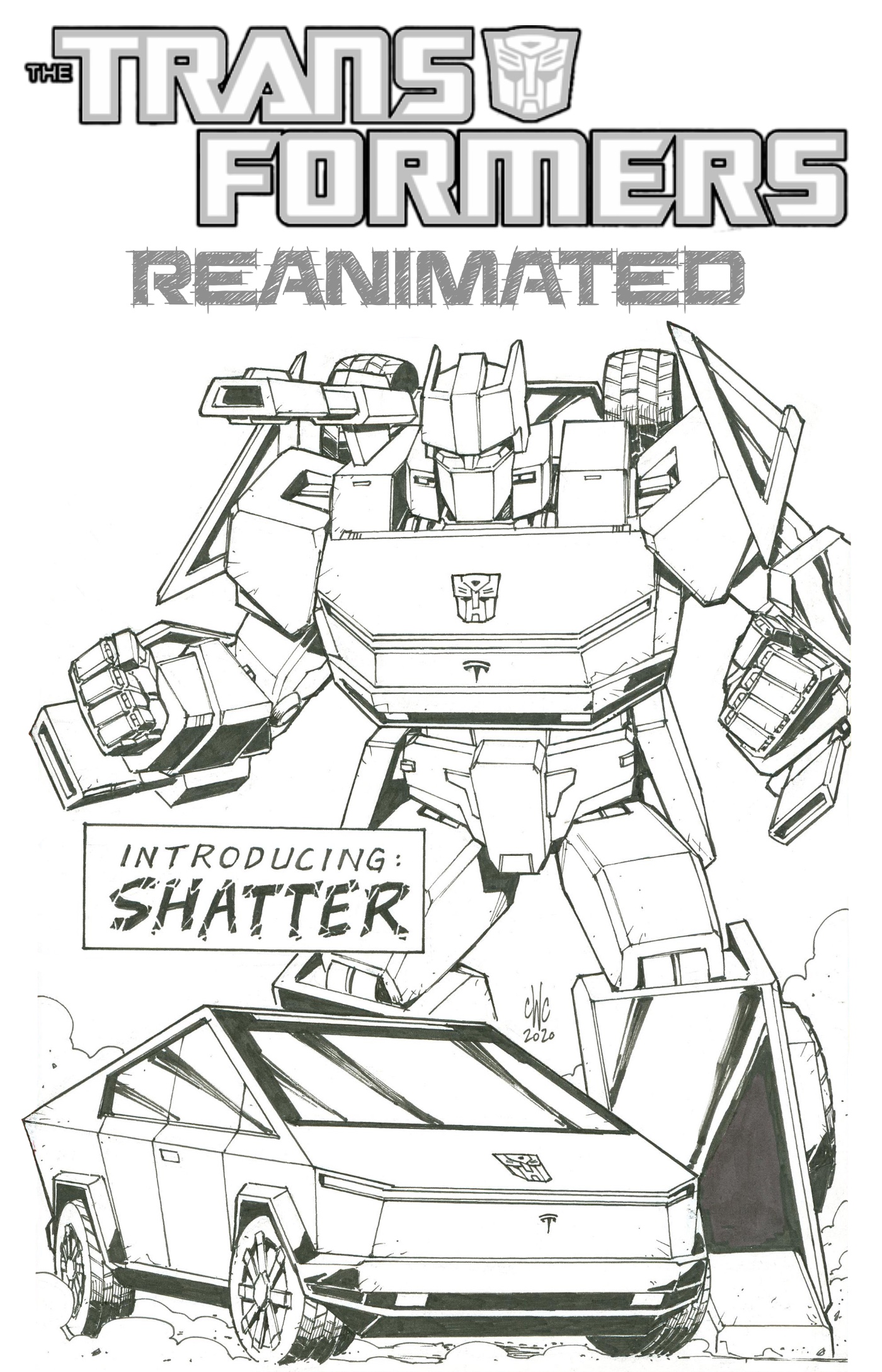 Sketch covers are just blank comic book covers released as a variant cover option for a particular issue of a comic book. The surfaces of these covers are generally uncoated, making it easier for an artist to draw on it.

Over the years, I got to meet many great artists and commission some beautiful and unique artwork. A hobby I still partake into this day.

The answer to this question came to me rather quickly. If I were a Transformer, I would want my alt-mode to be the most advanced vehicles planet Earth has to offer. TESLA. Thus, I started to go around to different Transformers artists and ask them if they would draw a particular TESLA vehicle as a G1 Transformer.

When TESLA announced the CYBERTRUCK, it was unveiled on November 21, 2019, in Los Angeles. (The same month, year, and location that the movie Blade Runner was set in.) I immediately started to think about what it would be like as a G1 Autobot. Alex F., a friend of mine, helped me with picking out a name. “Call him ‘Shatter’,” he said, in reference to the driver-side window shattering on stage after TESLA claimed that the Cybertruck’s “Armored Glass” windows were virtually unbreakable.

With the idea and character name in hand, I contacted Transformers comic book artist, Casey Coller and asked if I could commission him to design and draw up the character. He said yes and the results are mind-blowing.

In an interview with the TESLARATI I described Shatter’s shoulder cannon that Casey had given the character as an Electro Shock Cannon. It can be used to immobilize and bring down Decepticons. The weapon makes sense to me as TESLAs are an all-electric vehicle. It would stand to reason that any weapon he has would be electric in some way.

Originally I was apprehensive about introducing a completely new original character to the G1 Transformers mythos. Greig and I spent many late-night Skype calls talking about a possible time travel script. As the idea for the story grew and took shape, we thought it would be a perfect way to introduce a new character.

In the past we have introduced “new” characters into Transformers: REANIMATED, but they were always characters that at least had a G1 toy made. Presumably, if the original cartoon series had continued on past its four seasons, then most, if not all of the toy characters would have eventually been included in the cartoon to help sell them. Shatter was the first original character we were going to introduce.

But not the last.

Greig thought Shatter would be perfect for the script we were writing. I wanted my original character in the script badly, but I could not get past this mental roadblock that he is not a true G1 character. Greig, being the clever person I know, found a sneaky little workaround. A way to make it look like Shatter has always been there from the very beginning. You will learn all about it in a future issue of Transformers: REANIMATED.

Before Shatter made his debut in issue 22, he still needed something. Something to go along with his Electro Shock Cannon. Finally, it hit me while we were writing the issue. A Shield! Shatter would be able to use his vehicle mode’s door as a shield, just like a robotic Captain America! It made so much sense. Elon Musk himself said the Cybertruck would be bulletproof.

I love the idea of Shatter using his door as a shield that when we commissioned Casey Coller to do the cover for this issue, I asked him to please draw Shatter holding his door like a shield. I sent Casey this cover of Wizard Magazine number 76 that was drawn by George Perez and inked by Jimmy Palmiotti. I asked him to homage the cover and to use Shatter’s door as a shield.

Casey took on the challenge and what he was able to draw turned out incredible. This brand-new Autobot standing over a defeated Galvatron just makes the reader want to know who the hell this new guy is and how was he able to defeat one of the most notorious Decepticons to ever roam the cosmos.

A few weeks later, John-Paul Bove completed the colour work on the cover. The finishing touch to a character that took over a year to develop. John-Paul’s colors left me stunned with amazement.

The only direction I gave John-Paul was that the cover should invoke the G1 Transformers cartoon. What he was able to do nailed the character and created an atmosphere of curiosity which is exactly what I didn’t know that I wanted.

So there you have it. Shatter’s real-life origin story. When will we see Shatter in a Transformers: REANIMATED issue again? I can’t say. But he will be back.