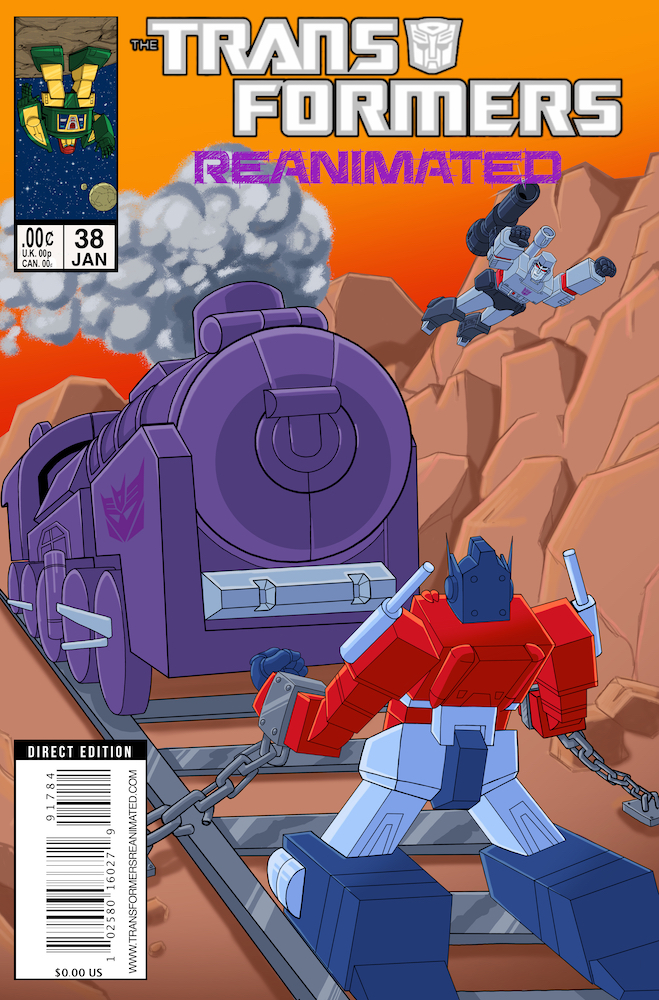 Issue 38 explores the desperation the Decepticons go through due to near-zero Energon supplies!

With dangerously low fuel reserves, Megatron is forced to take matters in his own hands, when he and Astrotrain attempt a train heist to acquire enough oil to restore the Decepticon focus, not only on earth, but on Cybertron as well.

Will the Autobots, distracted by their goal of building Autobot City, be able to stop the Decepticon leader and the triple changer from accomplishing their goal? Or will Megatron’s sheer determination be too much for even Optimus Prime to handle?

Find out what happens in this brand new G1 Adventure: Oil, Toil & Trouble.

This month’s explosive cover was made for us by the wonderful, Nate Hammond.

Written by Youseph (Yoshi) Tanha from the YoshiCast and Greig Tansley from the Unfunny Nerd Tangent podcast, this G1 adventure follows in the Transformers: ReAnimated tradition of bridging the gap between the cartoon’s second season and the 1986 Movie that defined the childhood of millions, worldwide.

So, if you *did* you like issue 38: Oil, Toil & Trouble, then please consider contacting IDW Publishing (Via E-mail or Twitter) and letting them know you would like to see Transformers: REANIMATED as an IDW ongoing comic book written by Yoshi and Greig.